WAYNE GABAYLO is the World’s only juggling and dancing spray paint Artist”. 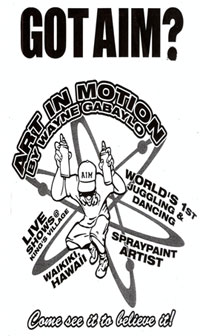 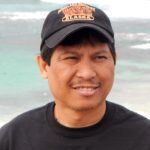 Wayne was born and raised in Ewa Beach, Hawaii. As a Youth, He began experimenting in his Dad’s garage with a unique way to paint, using Cans of Spray Paint and objects he found in his Mom’s Kitchen. Eventually, the Self-Taught Artist began Juggling and Dancing to the beat of Music, while Painting and creating his Works of Art.

He first started Painting at the Aloha Stadium, then in front of Kobe Steak, then the streets of Waikiki in front of Macy’s. In 2001, Wayne moved his show to Kings Village.

His show consists of Music, Juggling and Dancing, while creating his Art. It an exciting performance, with audience participation, that the kids as well as the adults enjoy. It’s been described as one of the “Best Night Time Activities in Waikiki”.

Wayne juggles and dances to all the top music hits, and finish his show with spiritual music, “Giving all the Glory to God.

Wayne strives to support his Community. He has performed for the American Cancer Society each year for Kids with Cancer. He performs free shows at Schools like Wahiawa Middle School and hopes to inspire the Kids to realize their potential in life.

Wayne dedicated one of his shows to assist the Red Cross by raising $1070.00 dollars for the relief efforts of Haiti Earthquake, and dedicates shows to remember famous Performers like: Michael Jackson, Whitney Houston, Diana Ross and Famous Actors like Robin Williams.

In 1991, Fuji and Nippon Television sponsored Wayne to perform in 5 major Cities around Tokyo including Tokyo Disneyland, and has had his story Published in the Popular “Popeye Magazine”. Today, Wayne is still featured on the Vacation Channel daily in Japan, and is considered a Star in the Japanese Culture.

In 2009, Wayne performed 8 amazing shows in Sydney Australia. He has also taken his show to: Palmer Alaska, Boston Massachusetts, Gettysburg South Dakota, and performed for the Mariposa Foundation in Los Angeles, California. He continues to get notice by getting featured on local T.V shows like the “The Hawaiian Moving Company”.

In 2014, Students from Mid Pac Institute created a Documentary which aired on the PBS in Hawaii. The show is called: “Hiki No” (Episode 516), describing how he got started, and his journey as an Artist.

Wayne is truly a Brilliant Artist. His original, “one-of-a-kind” Space Fantasy and Hawaiian Themes, consisting of Waterfalls, with Dolphins, Turtles and Sunsets as well as his famous Volcano Paintings, are just a few of his ideas that have been bought by Art Collectors from around the World.

Wayne’s has recently started creating paintings of “Emerald Turtles with brilliant Coral Reefs”. These paintings are 3 dimensional, and show just how brilliant he really is.

One of his many goals in life is to INSPIRE as many people as possible through his PASSION AND LOVE FOR ART. 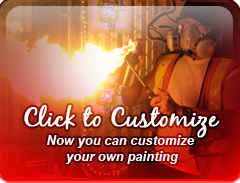 Kings Village is officially closed. Wayne has decided to continue to do private events and is excited to announce, that he will reopen Gabaylo Gallery, along with a studio open to the public. Continue to follow Wayne on Facebook, or you can reach Wayne through the Contact Us page on this website.